Xbox players no longer need to research which gaming monitor to buy! Philips has launched the dominating 559M1RYV gaming monitor, specially designed for the Xbox Series X, with exclusive Xbox certification. In addition to having a powerful and large 55-inch display, the 559M1RYV exuberates a commanding aura once it is actually connected to the Xbox. 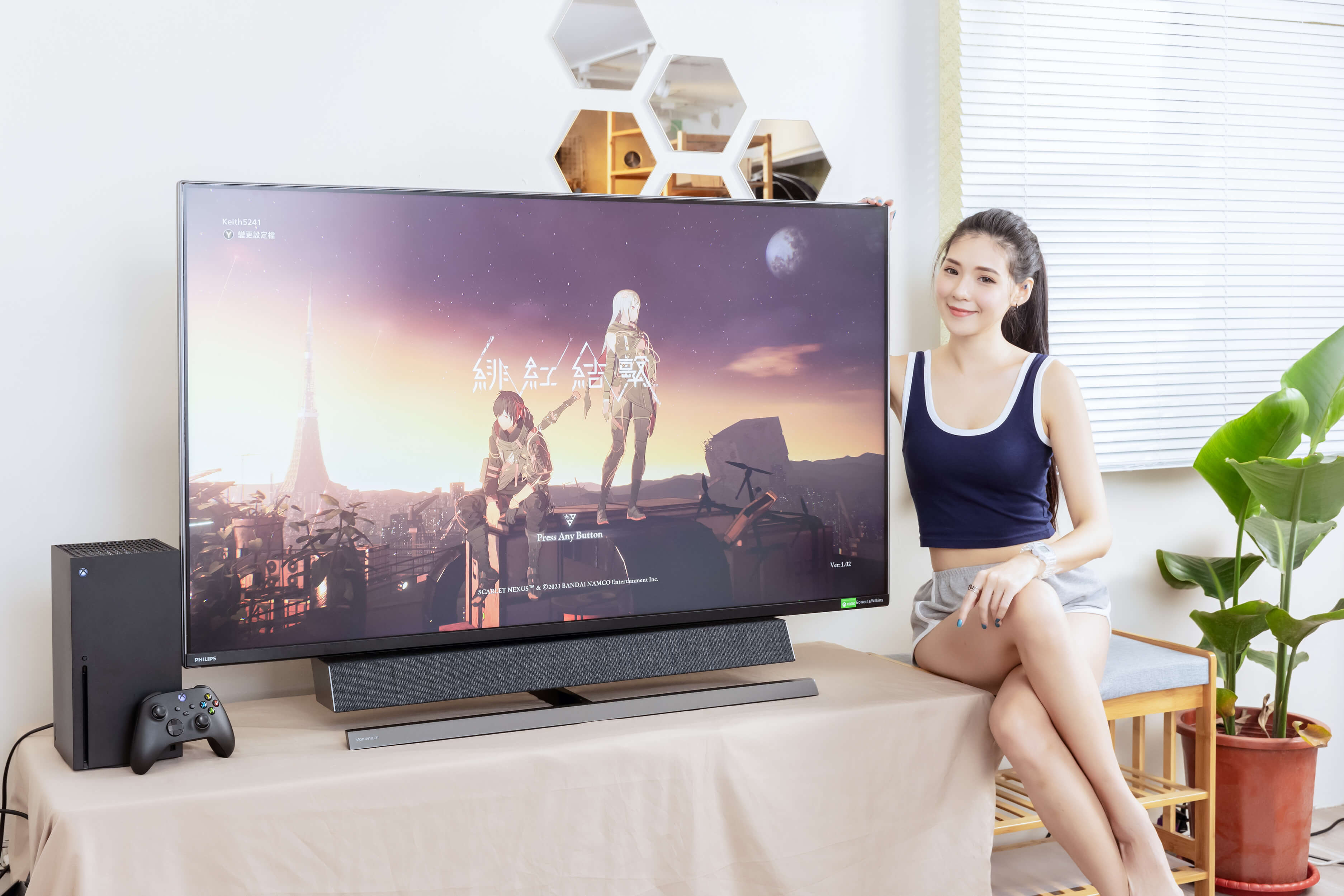 The Philips 559M1RYV is equipped with HDMI 2.1, allowing it to achieve an ultra-fast performance of 4K@144Hz. This display also supports VESA DisplayHDR 1000, as well as coming with a special Kvadrat wool material covering the soundbar, which is designed by the premium audio brand Bowers & Wilkins. Delivering beautiful picture quality and captivating sound effects, Xbox players will definitely feel enchanted by this display. Let's take a look at our unboxing.

The Philips 559M1RYV is a super-large 55-inch monitor with a diagonal length of nearly 140 cm. If a dog appears on the screen, it will scare your pets! Let’s check out Philips’ special design for the 559M1RYV! 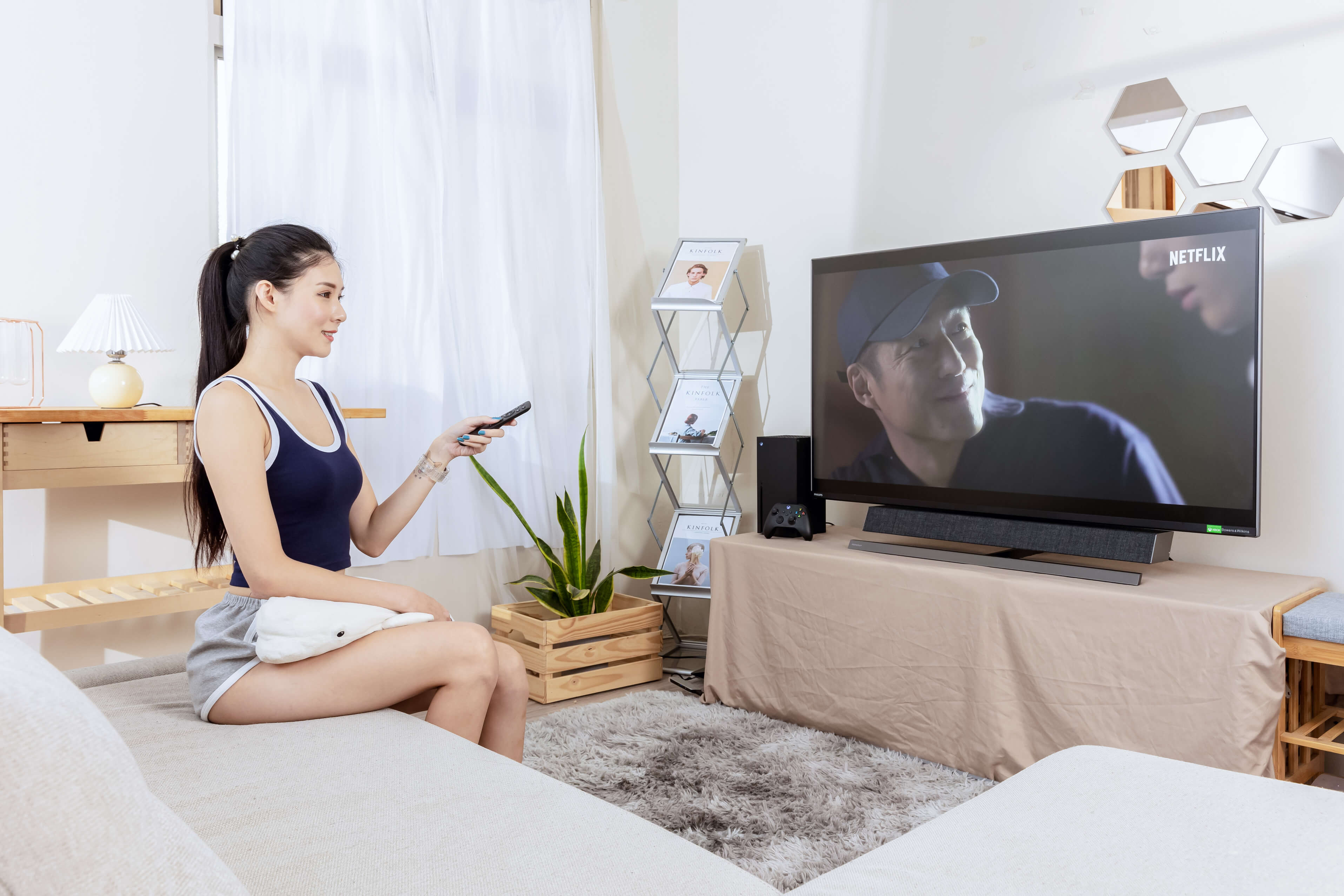 The metal front frame of the 559M1RYV uses a sleek hairline design. The metallic luster looks super cool, matching perfectly with the glossy silver metallic stand. The thickness of the screen frame is only around 1.9cm, with a 55-inch large W-LED VA panel. The overall color of the screen and the details of the dark areas are outstanding, an excellent choice for playing games or watching movies.

The Philips logo at the lower left corner of the screen and the Game Features for Xbox plate at the lower right corner, indicate that this is a display optimized for Xbox and supports the function of controlling the console through the display's remote control.

Another amazing thing is the B&W soundbar at the bottom of the center front of the screen. The famous Zeppelin Bluetooth speaker and Nautilus speaker are all designed by B&W, known not only for their elegance and beauty, but also top-notch sound quality.

The speaker has two built-in tweeters, two 10W mid-tweeter speakers, and a 20W woofer. It adopts Bowers & Wilkins’ 2.1-channel sound effect, supports DTS, and has a continuous average output power of 40W, which is ideal for regular small and medium-sized spaces. The soundbar with suspension design integrated into the display is of a considerable standard in terms of visual design and sound performance. 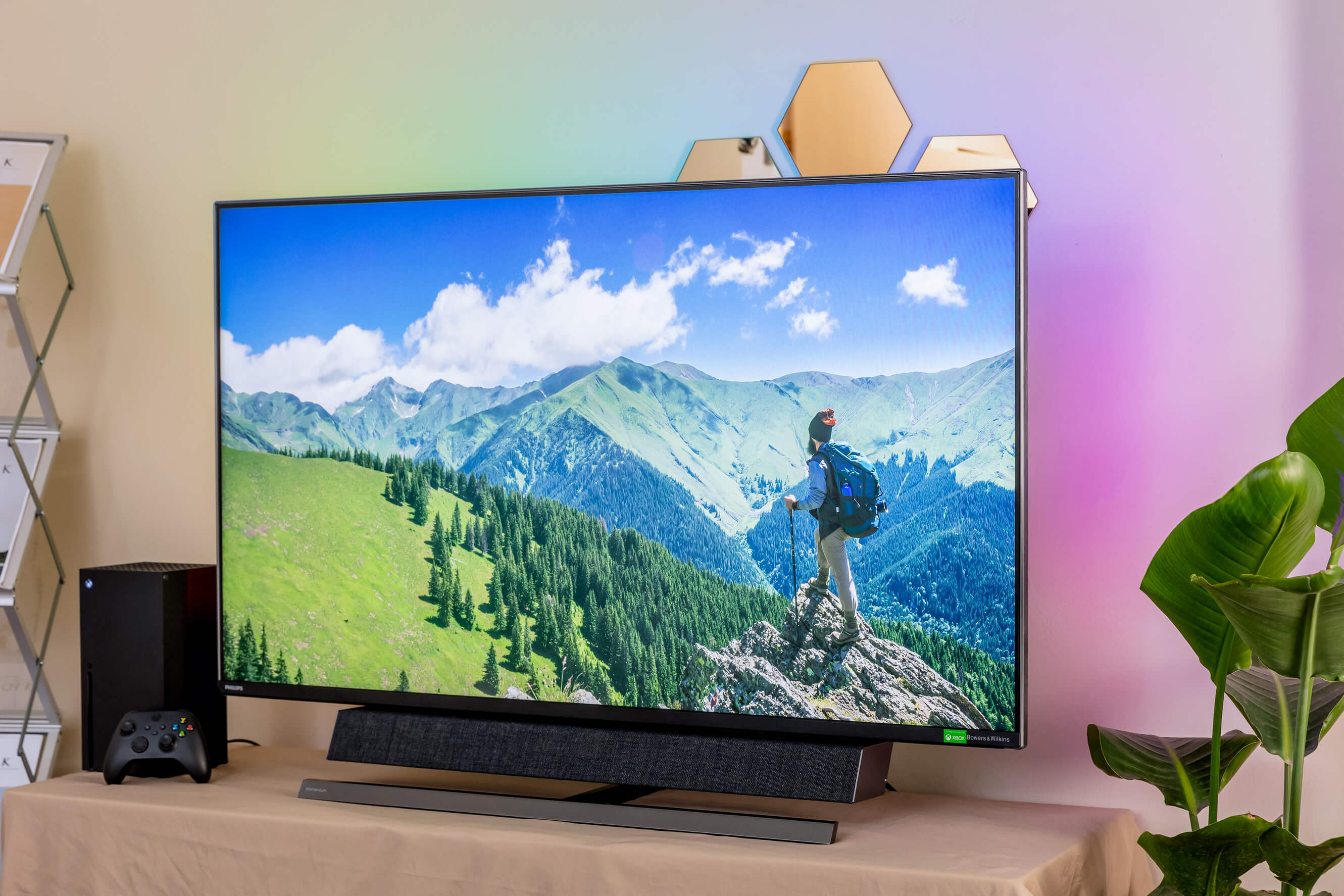 Sound effects you usually don’t pay much attention to when watching TV will suddenly become more prominent, with each detailed layer of sound becoming more obvious. Even just watching a house renovation program can deliver you a deep and enrapturing resonance. After all, the soundbar features built-in high, medium, and low-frequency drivers. You can imagine the outstanding quality of sound when playing games or watching movies, especially with the 559M1RYV featuring multiple sound effect modes, suitable for different genres of games and entertainment, such as car racing, shooting and action, music, movie watching, etc., definitely meeting the demanding sound requirements of picky users!

Back panel design and I/O ports

The back panel of the 559M1RYV is divided into three large blocks. The I/O ports include one USB-C ports, one DisplayPort, three HDMI 2.1 ports, one 3.5mm audio output, one USB-B upstream port, and four USB 3.2 ports, all placed in the lower right side of the back panel. In addition, two yellow USB ports with lightning patterns support fast charging of smart devices.

The five-way joystick that controls the functions of the monitor is placed in the lower left corner, along with the center of the back of the screen providing a VESA hole for wall-mounting (200mm x 200mm). 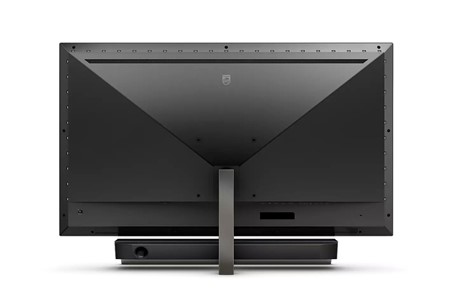 The 559M1RYV monitor mount uses an inverted T-shaped design, extending all the way from the lower back to the front of the soundbar, providing stable support for the entire screen while allowing the screen to be tilted back and forth (inclination angle -5 degrees, elevation angle up to 10 degrees). The overall design is sleek and minimal.

The 559M1RYV is also equipped with stunning RGB lighting effects and supports the latest Ambiglow technology. When it is turned on, a halo will appear around the screen. In addition to the basic setting, this display can automatically adjust screen color and brightness according to the image and sound, allowing players more immersion within the atmosphere of any game or movie.

The entire row of small white dots on the top of the screen’s back panel, from a distance, may look like an exposed design with a row of screws. However, upon close inspection, they are actually RGB LED lights. Some people may think this exposed design doesn’t look good. However, as the LED lights are placed around the back panel, you don’t usually see the LED particles directly. On top of that, this design doesn’t have the issue of the diffuser losing light, and when the lights are reflecting off the wall, the outcome is attractive and eye-catching.

Finally, the 559M1RYV also comes with a thin and light remote control. In addition to basic functions such as adjusting the volume and switching media sources, you can also quickly open the menu to set Ambiglow lighting effects, various sound effects, picture modes etc. Better yet, you can also control any connected Xbox consoles through the remote control conveniently. 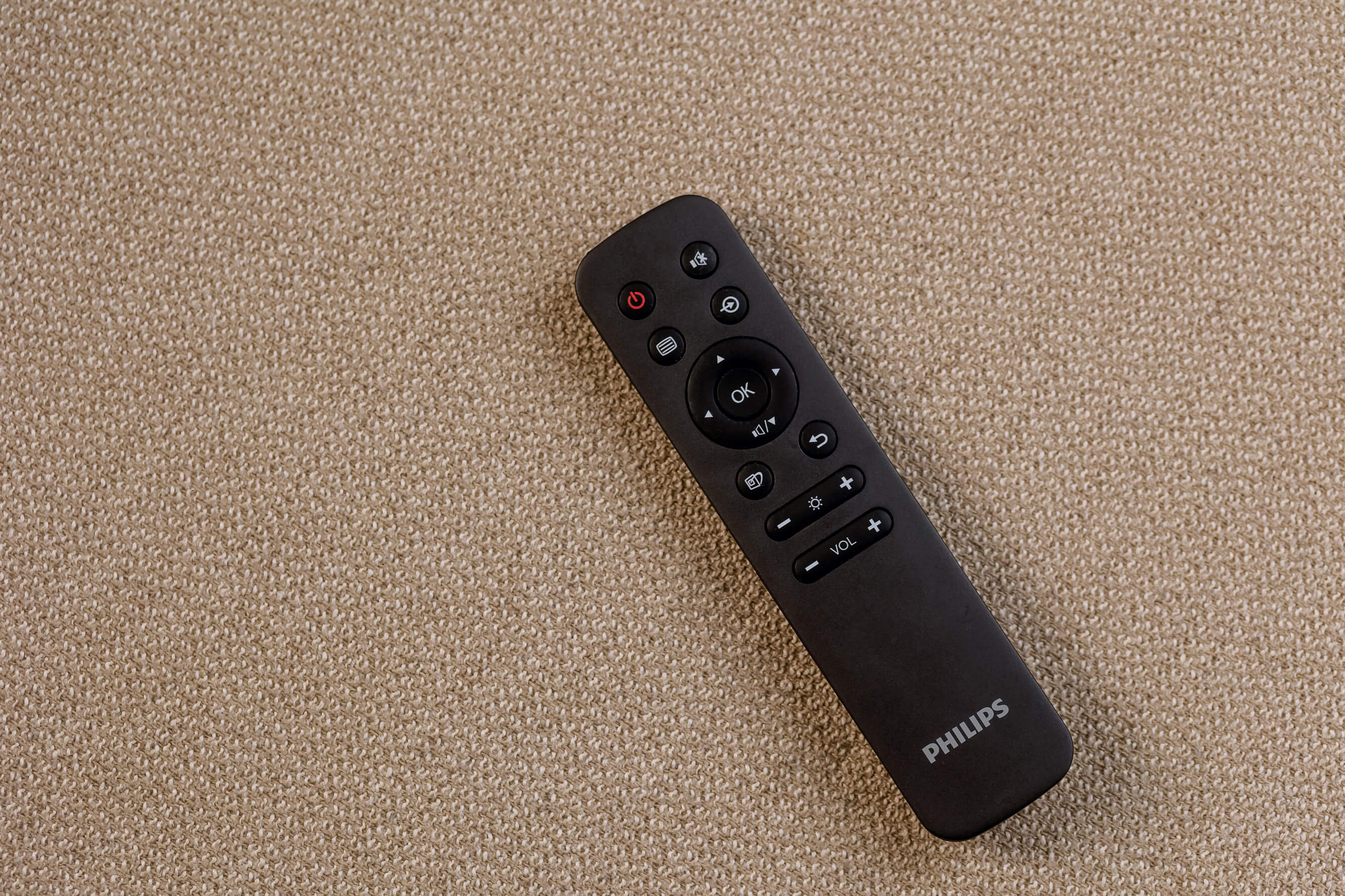 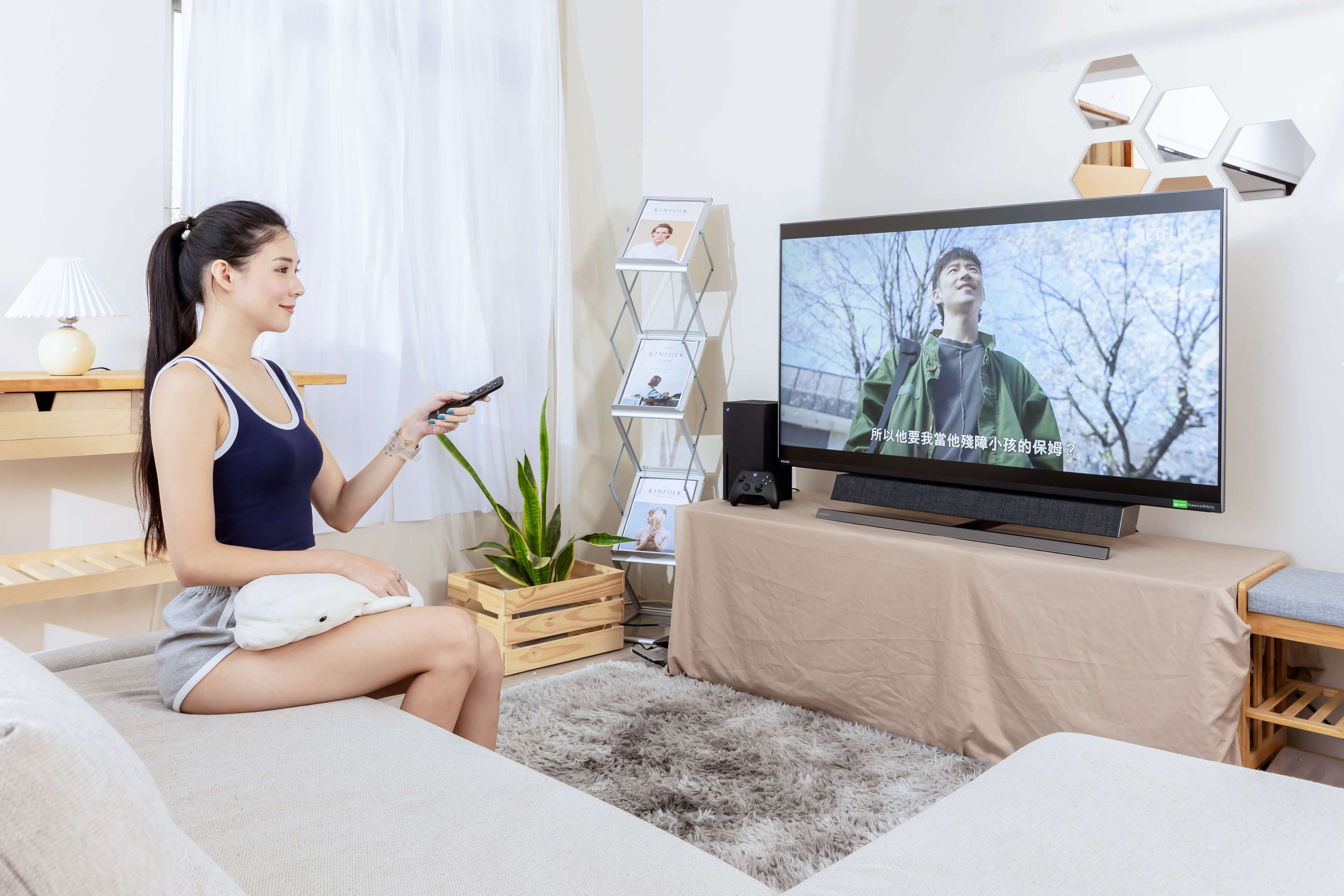 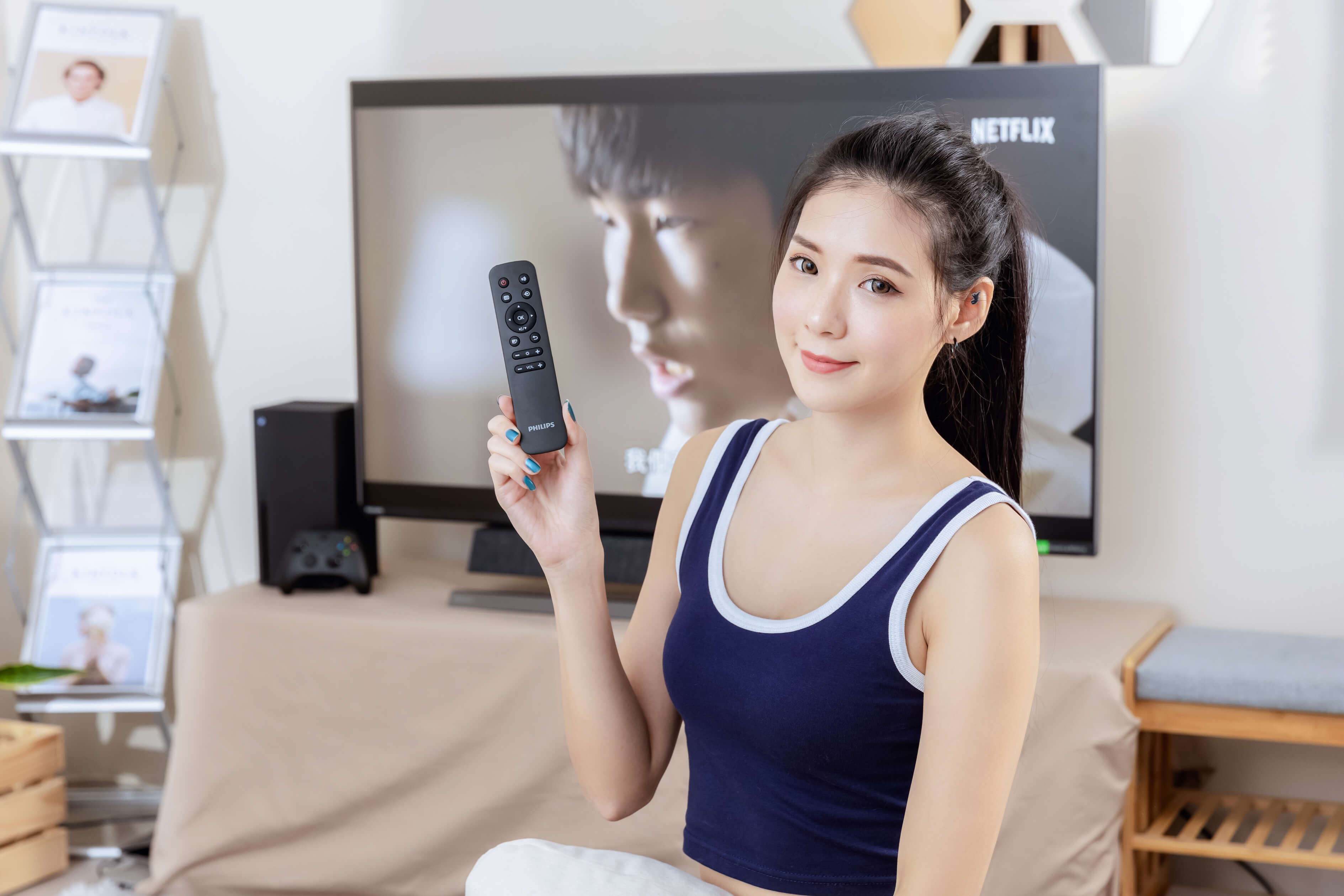 In the 559M1RYV menu settings, the first page displays Ambiglow settings, the lighting modes are divided into light and shadow, light and sound synchronization, marquee, color wave, breathing light, static, and other various modes. Many of these settings can be further adjusted for the direction of light, color, and brightness.

In addition to adjusting brightness, contrast, sharpness, Gamma, and OverScan, the screen settings also include SmartImage settings, which allow for dynamic adjustments of brightness, contrast, color, and other settings for different screen contents to achieve screen optimization. Modes include Xbox, FPS, Racing, strategy, 2 player modes, movie, economy, low blue light, SmartUniformity, and many other modes to choose from.

PBP settings include a Multiview function, which is an option that allows for the input of different signals, allowing for the possibility for screen signals of different devices to be displayed side by side.

The Audio Mode in the sound setting menu supports a variety of B&W-tuned sound modes, including sports and racing, role-playing and adventure, shooting and action, movie watching, music, personalization, and support for other audio equalizer adjustments. These settings can be adjusted in accordance to whether the screen is upright or wall-mounted in order to achieve the best sound performance.

After connecting the Philips 559M1RYV to the Xbox series X, the first game I played was the racing game "Forza Horizon 4". The opening picture was absolutely stunning. With the color contrast being so high, you can really see all the details and textures of visual images, just like a painting with proper shades.

When lights and shadows change, the smoothness of the sports car paint and the uneven gravel on the road are also quite realistic. The overall color is bright and saturated, but it doesn’t lead to people feeling uncomfortable. From the maple red in autumn to the snow white in winter, every transition is enjoyable and has a great sense of presence. Thanks to DisplayHDR 1000 and a DCI-P3 of up to 95%, the 559M1RYV perfectly delivers the optimal picture quality for the Xbox.

With the 120Hz high refresh rate, the feedback of speed and fluidity of images for the high-speed movement of vehicles in the game feel natural and realistic. For players who like to play racing games, the experience and visual quality delivered by the high refresh rate of 4K@120Hz is nothing short of amazing.

The next game I played was the action RPG “SCARLET NEXUS”. Compared with the detailed "Forza Horizon 4", I think " SCARLET NEXUS " better highlights the smoothness of the 559M1RYV color gradient. For example, during a scene when the two main characters of the game seem to be at a time when dusk is approaching evening, the sky's yellow, orange, red and black blend beautifully and naturally.

The buildings on the left that resemble the Tokyo Tower are basically composed of orange and red with different gradations, yet the net-like structure can still be seen clearly. After selecting a main character to zoom in further, even the buildings below the tower are clear and brightly lit.

Entering the battle screen, when the characters in the game are using their skills, they will first attack the enemy with their special powers, following up with a rush towards the enemy with a rapid swing, where a purple knife appears. When enemies fight back, gamers must quickly retreat and defend, as well as make good use of combined techniques.

With ultra-clear 4K resolution and 120Hz refresh rate, character movements are not blurred at all, with the overall picture quality being clear, smooth, and the colors consistently being visually stunning. No need to worry about interruption due to screen delay. The gorgeous purple special effects are very captivating during character movement. Attacking enemies rapidly while skilfully defending against enemy attacks truly feels satisfying. 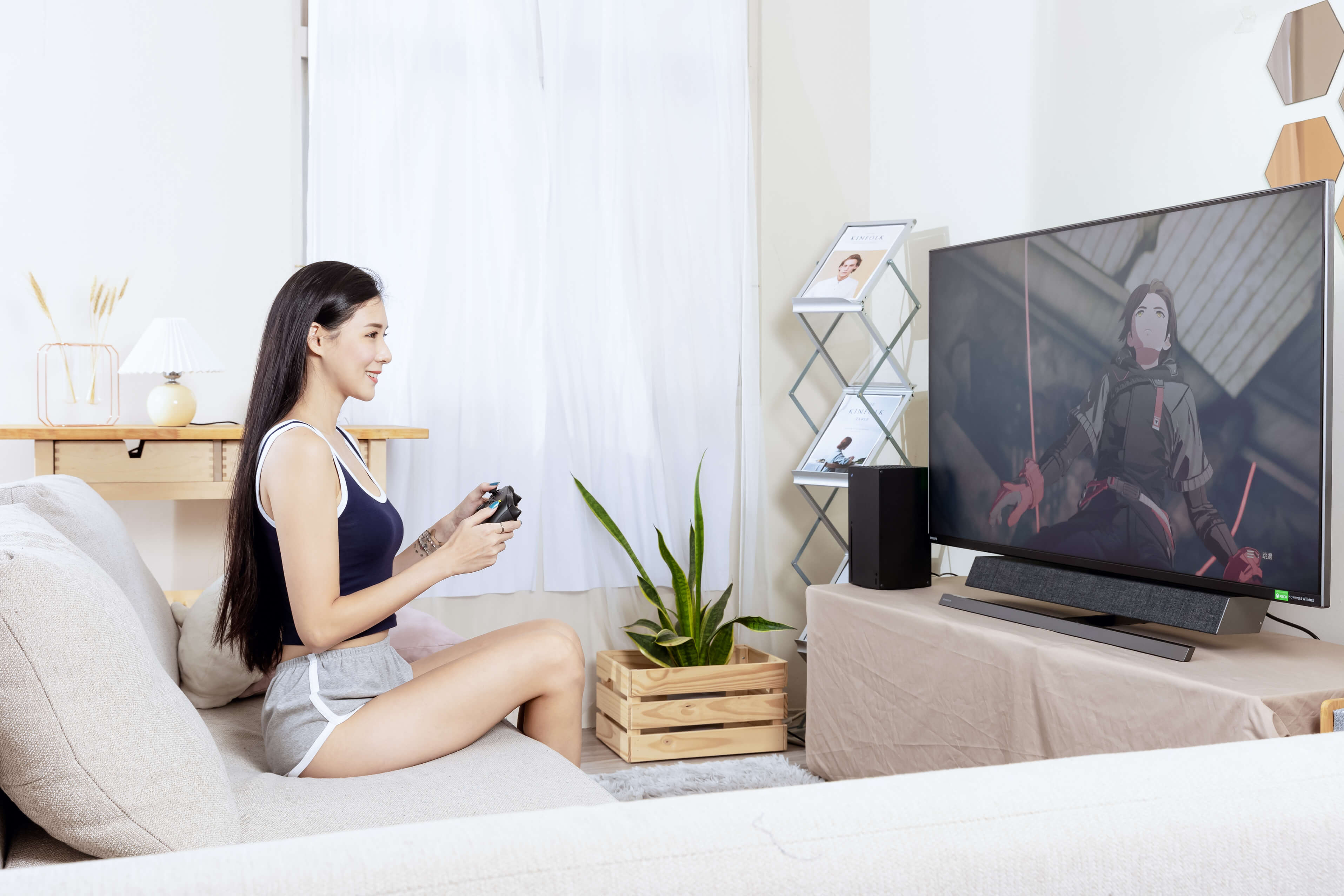 When I was playing on a regular TV, I found that the characters in the game were slightly delayed, often leading me to unconsciously press buttons for a long amount of time or vigorously press buttons to confirm whether command inputs have been detected. Of course, in this case, it is more difficult to seize opportunities in battle, with the sleekness and smoothness of the game being greatly reduced. Therefore, I find that it is actually very important to have a good gaming display for the optimal gaming experience. You will definitely feel the difference between a good gaming monitor and a regular TV right away.

In games, it is not sufficient to just have good visuals without screen delay. Sound quality must also be excellent. B&W's speakers really live up to their expectations. Even when sounds occur at the same time, such as the dubbing while characters move or the swish of a knife swing, the sound quality of each individual sound layer doesn’t conflict with one another and still remains consistently fantastic.

Each layer of sound from the speaker has its own duties. For example, you can really feel the forceful impact of the powerful bass when characters use their finishing move at the end of the battle. This leads to the whole game becoming incredibly immersive and enthralling.

When watching movies, visual quality was not only sufficient but amazing, whether it was displaying the 4K60 trailer of "Black Widow", the high-gloss area of Scarlett Johansson's new-generation white Avengers’ costume, or the popular Netflix series "Move to Heaven". When Han Kelu and his uncle Cao Shangjiu were in a scene with low light, the bokeh with light spots behind facial skin details were enchanting, the bright parts of the screen were not over exposed, and the shadow details were quite satisfying, delivering an overall picture quality that was smooth with a dazzling three-dimensional effect.

The 55-inch large screen of the 559M1RYV allows you to fully experience delicate textures of 4K visuals, with the color rendering that supports DisplayHDR 1000 creating an even more enchanting effect. When playing games with the Xbox series X, you can enjoy an ultra-smooth 4K@120Hz experience. While playing 4K@144Hz games on the screen, you get to enjoy high-quality and smooth 3A masterpieces at home. It’s awesome~ 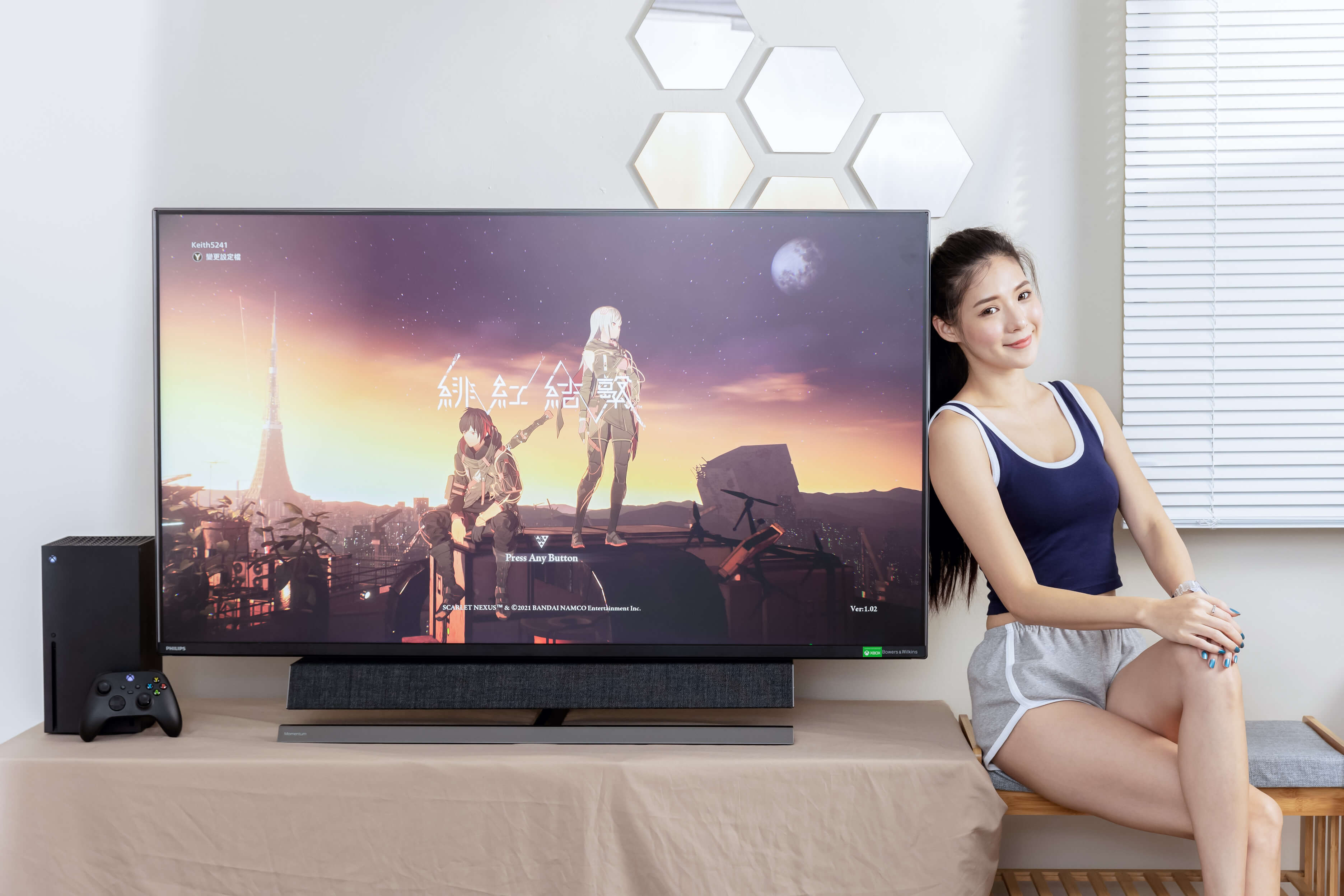 With the B&W’s Sound Bar, multi-driver settings, DTS support, and B&W’s built-in multiple different sound mode settings, the 559M1RYV delivers gaming sound effects with an outstanding audio standard. To players who are both gamers and sound enthusiasts, this display is a godsend.

Regardless of whether it is the low rumbling of a racing engine, the harsh brakes rubbing the road, the sound of vehicles approaching, the deafening gunshots of shooting games, the sound of footsteps approaching enemies, or the melodious and beautiful music in action games, each element is entrancing and faithfully delivered. You can guarantee a maximized level of immersion and enjoyment with the mesmerizing sound and light experience brought by this display. Knowing this, don’t you Xbox players want to switch to the 559M1RYV?